Anders Rahmqvist awarded prize as Race official of the year!

TCS Lidingöloppet is nothing without our race officials - it is through their passion and commitment that the arrangement has become a beloved tradition throughout Sweden and across the globe! 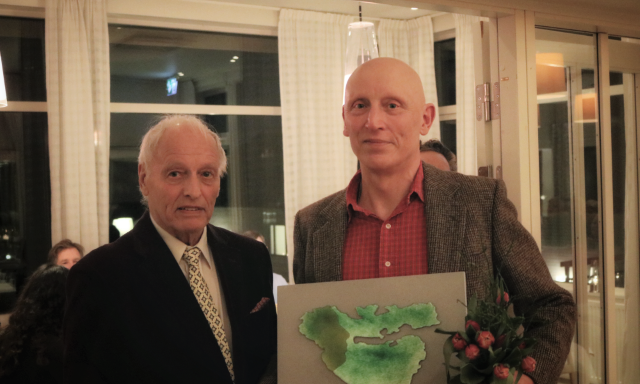 Lasse Dahlstedt and Anders Rahmqvist during the award ceremony

In an interview, Anders shares his impressions from his 42 years as a TCS Lidingöloppet race official:

What have you learnt during your more than four decade long experience at TCS Lidingöloppet?
- I have learnt to plan ahead, to establish new contacts and form networks, and to combine my own expertise with the competence around me - among other race officials, healthcare personel and race administrators.

What experience comes to mind most easily from all these years?
- My time as a speaker for the 7-8-year-olds during TCS Lilla Lidingöloppet! These participants manifest the joy of movement in its purest form - it is so important and so fun to encourage!

Another fun memory was when we managed our own speaker control at Fågelöudde. We brought with us a speaker car from which we played music and and cheered for the runners in the 30K race. We then noticed how TCS Lidingöloppet, through its slopes, winding course and soft trails, is a dynamic challenge where world-class marathon runners can suddenly be challenged by upcomers. This makes TCS Lidingöloppet both an exciting challenge for participants and a great experience for the audience.

You have had many roles as race official - as a speaker, as a manager at the energy stations, and as a doctor. Which of these roles has been the most fun?
- The role as the speaker during TCS Lilla Lidingöloppet. It has been so fun to interact with the participants and exciting to, through music and encouragement, increase the energy among the young runners. The role as doctor for the entire race weekend has also been very enjoyable - especially the community of  health care professionals is very inspiring, but the role also requires great responsibility.

In your roles as race official, you have also been stationed in many places along the TCS Lidingöloppet arena. Where is the energy the highest during the TCS Lidingöloppet weekend?
- It is difficult to choose - the whole weekend is festival-like and the great atmosphere can be felt around the entire arena. The energy might however be the highest at the start at Koltorp and at the finish at Grönsta.

You will now move on to new, exciting challenges. When you return to TCS Lidingöloppet next time, will it be in the role of runner or as a race official?
- As a race official!

From 2013, Anders became a part of the medical team.

When the pandemic started in the spring of 2020, Anders, in his role as doctor at the race, stepped in to guide TCS Lidingöloppet through a difficult time marked by restrictions and Covid-adaptations. During the Elite Race, which was carried out in 2020, a partially new healthcare organization was tested, which - under Anders' leadership, was established in full scale in 2021. In addition to the usual job as a healthcare professional, the work in 2021 also involved work in recruiting and training the entire healthcare organization. In addition, TCS Lidingöloppet was adapted in different ways so that both participants and race officials would feel secure during race, despite the pandemic.