The motif on this year's medal features one of Carl Milles' statues which best reflects the unique nature experience during TCS Lidingöloppet. 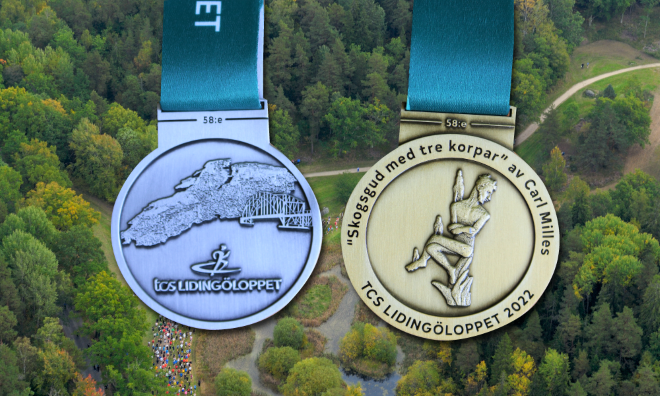 The 2022 TCS Lidingöloppet medal, which all participants receive at the finish line, shows Carl Milles' statue "Forest God with Three Ravens" (ca. 1875 - 1955). The work depicts the natural mysticism which was a recurring theme for the artist. The idea that there is a spirituality in all living things grows more and more prevalent during Carl Milles' lifetime. In his work, magical beings such as centaurs, naiads, nymphs and forest gods thus populate the lakes and roam the forests.

TCS Lidingöloppet hopes that the natural forces will give this year's participants a magical experience on meadows and forest trails during this year's race events!

All of Carl Milles' statues, which, for 30 years have been featured on the TCS Lidingöloppet medals, can be seen at Millesgården on Lidingö. The following Carl Milles works have so far been embossed on the medals (names translated to Swedish):

About Carl Milles:
Carl Emil Wilhelm Milles, born Andersson the 23th of June 1875 in Lagga (Knivsta municipality), died 19 September 1955 on Lidingö, was a Swedish sculptor. Carl Milles was active mainly in Europe, but for a long time also in the United States. He is known for his fountains and other works in large-scale format. Read more about Carl Milles at www.millesgarden.se